The message came from nowhere. On April 27, 2018, Agnetha, Björn, Benny and Anni-Frid announced that they had been together again in the recording studio after 35 years, resulting in two new ABBA songs. It was worldwide news. Then there was a delay: firstly because of setbacks in the accompanying Avatar tour project and then because of the Coronapandemic. The fans waited impatiently. But then, a message: 'The future of ABBA begins today' the group announces on social media on September 2, 2021. ABBA Voyage is there!

The horoscope of ABBA

In order to interpret the developments of ABBA Voyage and the new songs astrologically, it is first of all important to determine what ABBA's horoscope is. When did ABBA start to exist? Perhaps when the four members first appeared on stage together on November 1, 1970? (But then they only sang in Swedish, and that didn't make them internationally known.) When they won the Eurovision Song Contest on April 6, 1974 with Waterloo? (But then their single and album Ring Ring had already been internationally successful.)

Let's consult Carl Magnus Palm, the man who is considered the most prominent ABBA historian. In his book The Complete Recording Sessions* he describes a moment when (A) Agnetha, Björn, Benny and Frida are together in the recording studio (ABBA was a studio group par excellence); (B) to record an English-language song, namely People Need Love, which (C) would be registered in the name of all four members for the first time. On that day, all the conditions with which ABBA has become successful are met. We write March 29, 1972. 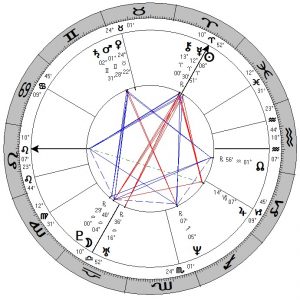 Let's take a closer look at the horoscope of that day. It is hardly possible to determine a time, which is why we assume a 12-hour horoscope. Which means that the Moon and the distribution of houses are uncertain. Mars is in the degree of the Lunar Node. So Mars colors the direction and destination of the group, with conquest, perseverance, passion and drive. It also indicates that a moment may (will) come when the members of the group each go their own individual way.

The planet Venus is strong in its own sign and with no major aspects. So she can show extremes, as well as indicate qualities around her themes. Such as a great artistic talent, a striking personal style of presentation (ABBA is known for its eye-catching clothing) and a sparkling appearance. Prerequisite is a strong mutual harmony. If that falls away, the group can, very extremely, suddenly lose control of its qualities and face a blocked creative expression.

We also see quite a few conjunctions (a powerful connection between planets) in the ABBA horoscope, namely Sun/Mercury, Moon/Pluto and Mars/Saturn. To start with the latter: this is a group with great ambition. There is more than enough decisiveness and perseverance to conquer the world. With the Moon/Pluto aspect, the group comes across as powerful to the general public. There is also a need for control over the shaping process, i.e. managing the career. The Sun/Mercury connection is an appropriate aspect for a group that makes contact with the audience through music/singing and a powerful performance. The conjunct opposites the Moon and squares Jupiter in Capricorn. Which indicates a structurally job-led increase in popularity and expansion abroad. This is certainly not a group that settles for making some nice music in their own small circle.

Anyone who knows a little about ABBA will recognize the group in the image just outlined, up to manager Stig Anderson, who exercised strong (productive) control over the way in which the group was put into the music business. But to be sure that this really is ABBA's horoscope, the transits and progressions must also fit. The question is therefore whether appropriate connections have occurred between the current planets in the sky and the radix planets in the group's horoscope at important moments in ABBA's career.

On April 6, 1974, ABBA wins the Eurovision Song Contest in Brighton, UK. Progressed Saturn is at 4° Gemini (as we will see below an important degree), progressed Moon (although uncertain due to the 12-hour horoscope) squares Jupiter (a huge chance of expansion and familiarity with the general public), progressed Pluto is moving up to a triangle with Saturn (which may indicate an important new prominent position) and progressed Saturn is close to opposite Neptune (powerful impulses to image formation and dreams coming true). Transit Pluto is in orb with the Moon (though subject to change).

The horoscope of the moment that presenter Katie Boyle officially announces that ABBA is the winner of the evening (the exact time - 11:11 PM BST - can be found through YouTube) is remarkable, because there are many similarities with the ABBA horoscope: Sun in Aries, Sun opposition Moon, Venus unaspected, Mars in the degree of the Lunar Node and Saturn conjunct Mars.

After winning the Eurovision Song Contest, progressed Pluto conjuncts the Moon from September 1975 to November 1977, i.e. in the years that ABBA becomes increasingly successful with singles such as Fernando and Dancing Queen and their "classic album" Arrival. Then Saturn takes over from Pluto to perpetuate the success of the group. From May 1977 to May 1979, progressed Saturn sextiles ABBA's radix Sun. A very appropriate position for stable recognition and success. But also for shadow themes.

Success has a price and if something is not quite right somewhere (for example in the mutual harmony, an important aspect for the existence of the group and prerequisite for the "sparkle") Saturn exposes that. Agnetha and Björn separate when progressed Saturn exactly sextiles ABBA's radix Sun. Transit Saturn inconjuncts Chiron and transit Chiron makes a yod on the Moon/Neptune sextile in the radix. At that moment the group is celebrating major triumphs with the single Chiquitita and the album Voulez-Vous, but must also deal with tensions in the mutual relationship.

In February 1981, when the Super Trouper album is high on the charts, Benny and Anni-Frid announce their divorce. Progressed Pluto opposites ABBA's radix Sun. In addition, transit Pluto and transit Neptune make an exact yod on ABBA's radix Venus: the sparkle of the group is under great pressure and the creativity "leaks away". It is under the transit of Pluto on Venus that the group silently disappears from the world stage in August 1982 (ABBA never officially broke up).

I think we have shown that March 29, 1972 is definitely ABBA’s horoscope. And this horoscope has a so-called "sensitive degree". As soon as transit or progressed Saturn touches 4° something big and important happens in the group's career. Take a look at the following list:

You would expect ABBA Voyage to be introduced at 4° as well, but that is not the case. The list above is a summary of ABBA's blockbusters and the new songs were never written and sung with the intention of producing another blockbuster. The new ABBA songs were created because it felt good and was fun. In the press release of April 27, 2018, the four ABBA members speak of 'an extremely joyful experience'. They had fun together and felt the love again. The sparkle of being creative was back! And that love and sparkle lead us back to the planet Venus.

By the time the news about the new ABBA songs came out, the songs were already a year old. In the summer of 2017, when Agnetha, Björn, Benny and Anni-Frid were back together in the recording studio for the first time in 35 years, primary Venus walked into a square with ABBA's Sun. In addition, as of March 2018, the primary Sun orbited ABBA's Venus. So we see the 'preliminary work' of the progressions:

While progressions set out the main lines and do the 'preparatory work', it is often the transits that make situations concrete. Transit Pluto enters orb with ABBA's Venus as rumors mount that the group may have recorded not two but five new songs. It becomes even better: via a worldwide YouTube reveal on September 2, 2021 ABBA announces the name of a whole new album: Voyage!.

Do you remember? ABBA silently disappeared from the world stage when transit Pluto was inconjunct ABBA's Venus. Now the group returns under the same connection: transit Pluto trine Venus. ABBA's unaspected Venus is completely 'on' under the influence of Pluto: the harmony, the creativity, the sparkle and the love are back!